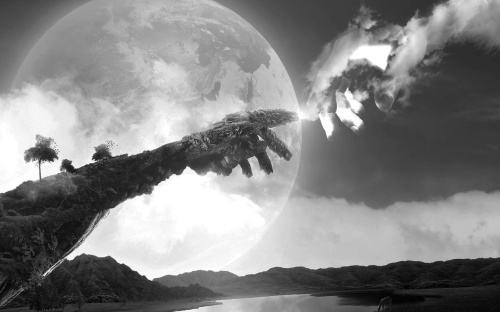 The Kingdom of All Kingdoms

Everybody hates hypocrisy, but many can’t live without it. This thought made the Queen sick in her stomach, felt like throwing up. Why “citizens” can’t get over this bullshit?

The Queen has a very good friend of hers in the “upper-world”, a friend to whom she likes to talk. By the “Royal River” they sat, enjoyed the view and the breath taking golden charm of the river and its surroundings.

The Queen told her friend, “Gaia”, that she doesn’t like the fact that the majority of the “citizens” are hypocrites and that they don’t have the courage to be natural, honest, blunt and be themselves with others. And although “Gaia” looks rigid with her rocky hips and shoulders, along with her sandy legs, she has the brightest hair, all in green, and the most beautiful waterish eyes, they are as blue as the bluest sea, and as deep as the deepest ocean, “Gaia” has always been wise, patient, very adapting, funny, but could still be very short tempered.

“My dear Queen, what do you expect? They have been always the same since the beginning of life on the “under-world”, and they will always be like this”, “Gaia” said throwing golden stones into the river.

“Yeah, you have known them better than me, longer than me, and I can see your point, But what if?” Zoya the Queen commented,

“What is what your majesty?” “Gaia” kept a stone in her hand waiting for the Queen to speak.

“Don’t get me wrong dear “Gaia”, you know how “citizen” are when they are drunk, high or under the effect of certain things? you know right?” She wondered.

“Of course I know! But what is your point your majesty?”

“My point, and don’t get me wrong again I repeat, if we got all these “citizens” drunk and high down there, don’t you think things will be different? I think they will have a chance to be more honest, they will treat each other openly, no theater drama and hypocrisy will be needed.”

“My Queen!! You do know that some of them become aggressive and dangerous when they are under the effect of alcohol and drugs, don’t you?”, “Gaia” showed concerns.

“Well of course I know, what If we just give them the right dosages? Not to over do,  that’s what I mean, I want to see them honest, just honest!”, she explained.

“Gaia” laughed, and thought it won’t be bad to experiment that, she loved watching “citizens”, their behaviors have been always a subject of curiosity to her, though “citizens” did and still ruining “Gaia”‘s health and pretty looks with all their industries, trashing and carelessness.

“Let’s do it and see”, “Gaia” whispered to the Queen, and so the day came when every single adult “citizen” was under the effect of some drug or alcohol, “Gaia” and the Queen sat there in that room where they can monitor and see the world down there, they were sitting there and laughing so hard at how human can look totally respectful at the same time very ridiculous when honest. It was totally funny to see how some “citizens” flipped against their work partner, bosses, life partners, friends, quit their jobs, started looking for other houses, decided to change expensive cars for cheaper cars, decided to stop buying expensive clothing and instead by something during the sale seasons or from the flee markets, many were honest enough to simply be themselves and do the things they enjoy, simply the things they enjoy, not just do things to get approved by others. Watching those “citizens” suddenly change and suddenly open up and start doing new things or quit doing old things, amazed both the Queen and “Gaia”. But that wasn’t enough for them, they took a look at social networks, and they both thought observing “citizens” and read their statuses and comments on social networks were completely different experiences.

Their statuses turned out to be shocking! Too honest they were! Telling each other they no longer wanna talk to each other, calling each other names, bragging about their honesty, feeling too powerful and strong, admitting being silly, idiots, dumb, scared, selfless, or even selfish in the past, opening up and expressing how sick they got of having to wear masks and pretend things they don’t feel.

And there were other good things too, like opening up to each other and expressing admiration and love towards each other, they weren’t scared that day to express their  good feelings. Which was pretty amusing to both the Queen and her good friend “Gaia”

And that’s how they spent some time together during the day, watching, monitoring, reading statuses and laughing. Although they both knew as soon as these “citizens” sober up everything will be back to what it used to be: HYPOCRISY, HYPOCRISY AND MORE HYPOCRISY!