Ghassan Kanafani born in Akka, Palestine, April 9, 1936. Assassinated by a car bomb in Beirut, Lebanon,  by the Mossad, July 8, 1972. Ghassan was a writer and an active leading member of The Popular Front Of The Liberation Of Palestine. So besides being a writer he was a politician. 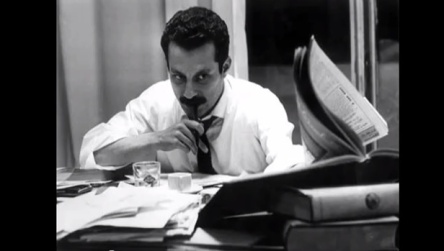 The Other Thing “Who Killed Layla Al Hayek”, is a novel that was published the first time in the weekly magazine”Al Hawadeth” in Beirut, in a format of nine episodes, starting in June 1966. Ghassan Kanafani never publish it separately, maybe as assumed, dude to political reasons; The 1967 War.

Many critiques saw the book as a negative thing in Kanafani’s works, relating that to the difference in theme and style of his writing, since usually he referred all his books and fictional books to the political situation in his motherland, Palestine.

After reading the book, which is of a fiction/Detective genre, full of suspense and analyzing of the circumstances that made the main character “Saleh” the murderer of “Layla Al Hayek”, I still didn’t see why was it considered different. The whole story, if quickly read without any further analyzing, or without being given a further thought, looks like many other fictional books, I agree. But looking deeply into the story and the idea behind it, Ghassan Knafani shouldn’t had been criticized.

If we re-read the book once more, and viewed “Layla Al Hayek” as “Palestine”, everything will change in our eyes. Ghassan Kanafani is a symbolic writer, and a good writer/Author, he wouldn’t, as many good authors, teach us how to read him, he simply wrote and we simply read and still reading. “Layla” if taken as “Palestine”, would make complete since, the case of all Arabs and Palestinians, murdering their own land by “Accident” or “Ignorance” or “Personal Interests”, pointing fingers on the most logical “Person” or “Party”, who is “Saleh” in the story, and the “Arabs” in real, being in the right place and time under the perfect circumstances.

“Saleh’s” silence in the story, is one thing that doesn’t really make sense to the reader; why would anyone not defend themselves in court, in front of a death sentence? To me at least, Ghassan did want us to see how “Saleh”, as “Arabs”, knew there was nothing much he could do to change his destiny, as everything around him was totally against him, and much stronger than him. Which can also be related to what “Arabs” had to go through back then, although at that time, they did try to change things, either with their resistance, silence, their blood being shed, sacrifices or else how.

But there is also the mutual feeling “Saleh” and “Arabs” have/had, which is hope. “Saleh” had hopes for something magical, some miracle maybe, to happen to get him out of the curse he was under, to be taken to another world, where he isn’t standing in a court accused for a murder of a woman he barely knew, but desired to feed his ego as a man, he wished for his past peaceful life back, but he didn’t fight for it, he was sentenced to death and all he did was writing a letter to his wife, which can be the new life and the next generations of the Palestinians and all the Arabs, asking her to believe that he didn’t kill “Layla”, and that he loved her, his wife, genuinely.

There is one more mutual feeling between “Saleh” and “Arabs” in the story, which is “Shame”; shame of allowing something stupid like that to happen, by not assuming he was walking towards a trap set by life and circumstance. He didn’t defend himself, because he was ashamed to admit out loud that he was having an affair with a married woman, who’s his wife’s friend. He was ashamed of being seen as a filthy lawyer, and an unfaithful man to his own family, he was also afraid to ruin the reputation of “Layla” too, and that’s what “Palestinians” did later on when they flee and immigrated and left their lands behind them, they felt ashamed not knowing how to justify their act and behavior.

In the story “Saleh” admits in his letter that he, at some point, wished “Layla” dead, because this is the only way he could keep her love in his heart, without problems, besides the love he had to his wife. And this is also what happened to “Palestinians”, who lost their lands; they deep inside them will always love what they were forced to lose.

He at the end shared his will with his wife, to use the letter for future reference for herself and others around her to start a new life, to turn a new page and keep going, not to give herself a chance to look back, reminding her that time is a healer. He even shared his fears with her, he hoped with terror that he can keep his silence in front of the hanging rope and face death quietly, and this is every “Palestinian’s”, inside “Palestine”, attitude, the full surrender to death for the sake of the sacrifice.

This whole thing might show something here, maybe the disappointment Ghassan Kanafani might have had felt back then at some point while writing his episodes for the magazine, the tiny bit of political surrender he might have had had in his heart at a certain stage of his life, of the sadness towards his love to his country.

Ghassan didn’t point out his attachment to the land directly in this book, nor showed it to us in fictional understood rhythms,and that to me , certainly, makes it a very successful piece of art. Maybe I’m wrong, and maybe the critiques were right, thinking Ghassan did write something different that had nothing to do with the case of Palestinians, all Arabs and Muslims. But literature is an art, and you go figure 🙂